IT outstaffing services: Benefits for the business of any size

More and more companies are moving away from traditional ways of managing people in favor of more innovative methods. So what is the essence of such a new but already a quite common concept as outstaffing company? How can it help save money and accelerate business growth? Let’s figure it out.

How does outstaffing work?

This concept can be described as the withdrawal of staff. This process involves three parties: the host company, the recruitment agency, and the hired employees. The actual employer of specialists is precisely the intermediary company, and labor relations arise with it. When signing an outstaffing contract, specialists will perform specific work for the host enterprise while the staff continues to be registered with a private employment agency.

Thus, the intermediary company transfers part of its personnel to another enterprise for temporary use. In the IT direction, technical specialists, designers, developers, and other experts are outstaffed to solve digital problems. 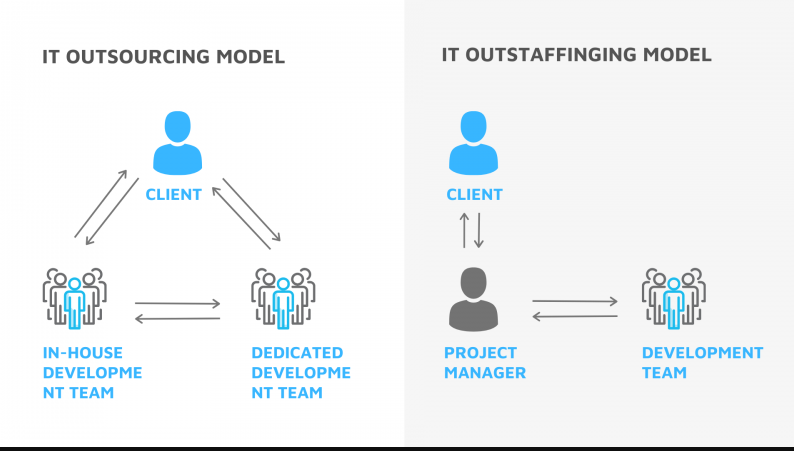 This service has several other benefits, including:

The main risk for the employer is to run into an illegal outstaffing agency. In this case, all sanctions for illicit workers, non-payment of taxes, and violation of migration laws will fall on him.

How does the IT outstaffing company help to optimize development costs?

Most are interested in the question: “Outstaffing: what is it?” and why such a procedure is needed. Traditionally, companies have hired employees to perform the tasks they need, so why change anything? Moreover, you will have to pay for the services of an intermediary company.

On the one hand, everything is true because such services cannot be accessible. But if we consider everything in more detail and then make the necessary calculations, we can understand that outstaffing is very profitable financially. Large enterprises that use outstaffing can reduce their costs for these items by up to 5 times.

Start a project with us!

Which companies are suitable for outstaffing?

Large IT companies to strengthen the in-house team and test hypotheses.

These are companies where the in-house team makes 85% of the products. They bring in people from outside to quickly develop a new feature or product and see how users react. If successful, the internal team will continue to develop the product, and outstaff specialists will be transferred to other tasks. Such companies value their own expertise, prioritizing long-term cooperation (from six months).

Such companies have a small IT department — a few employees are on fire during releases and deadlines. They do not have enough individual specialists or expertise to solve some problems right now, but it is not profitable for them to hire a new person on the staff: in the future, there will be no tasks for him. These companies need outstaff specialists to solve current problems, so they are hired for a short time (several months).

Outstaffing in the world

Because outstaffing results in cost savings and increased productivity, we are confident it is the future. For example, Citigroup took 11,000 specialists out of the staff and now works with them only through a provider. Qualcomm employs departments in four countries through outstaffing. Startup Worldwide gave the whole complex of work on the product to outstaff team: programming, design, marketing (SEO/SMM). For them, it was a way to quickly get a well-coordinated and powerful team instead of collecting it bit by bit, risking losing the market. And the successful outstaffing from Estonia at one time allowed Skype to move from developing an idea to selling the company for $2.5 billion in 2 years.

If a company does not want to bother about where to find good specialists, how to raise them, and what taxes to pay for them, outstaffing will help. Outstaffers take on all the costs of arranging specialists, and in the meantime, the customer develops his business and begins to earn more.

Outstaffing is a service that involves hiring an employee who will work for a customer company but will not be officially on its staff. In simple words, outstaffing is the withdrawal of people from the staff. At the same time, outstaff employees will have an official employer, an outstaffing agency.


What is the purpose of outstaffing?

Outstaffing workers is a personnel management tool that helps regulate the number of employees in the company while not expanding the official staff. This is incredibly convenient for large companies that face restrictions on the number of full-time employees.


What is the difference between outsourcing and outstaffing?

The essence of outstaffing is to provide employees to the company, and outsourcing is a service for transferring a function to a contracting company. For example, an outsourced service could be cleaning, facility security, logistics, or even production.

SAP Implementation Services: Everything You Should Know

What information do we collect?

We collect data about how our users use our website. This also applies to the newsletter and the usage of forms.


How do we use the information?

The data we collect, we use in one of the following ways:

The information we collect will not be sold, exchanged, transferred, or given to any other company without your consent – except where it is necessary to provide the product or service you have requested.

Yes, we use cookies. We use cookies to understand your preferences and thus be able to tailor the experience during future visits to our website. We also use cookies to collect information about traffic and interaction so we can deliver a better user experience in the future.

Necessary Always Enabled
Necessary cookies are absolutely essential for the website to function properly. These cookies ensure basic functionalities and security features of the website, anonymously.
Functional
Functional cookies help to perform certain functionalities like sharing the content of the website on social media platforms, collect feedbacks, and other third-party features.
Performance
Performance cookies are used to understand and analyze the key performance indexes of the website which helps in delivering a better user experience for the visitors.
Analytics
Analytical cookies are used to understand how visitors interact with the website. These cookies help provide information on metrics the number of visitors, bounce rate, traffic source, etc.
Advertisement
Advertisement cookies are used to provide visitors with relevant ads and marketing campaigns. These cookies track visitors across websites and collect information to provide customized ads.
Others
Other uncategorized cookies are those that are being analyzed and have not been classified into a category as yet.
SAVE & ACCEPT